I woke up, packed up and was on the road bright and early. Here are some views from the morning: 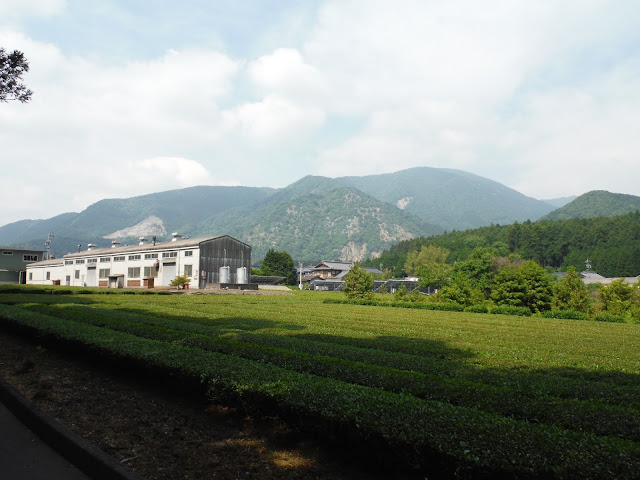 It was the people who really made today interesting though:

Next was this old fellow: 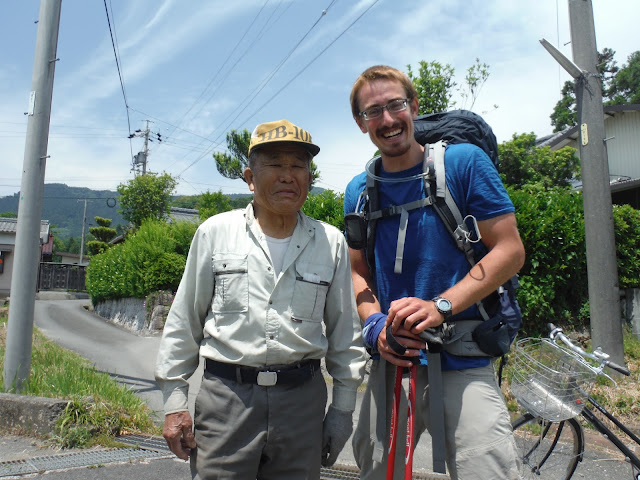 He was cutting wood as I walked past and was a bit shocked, but not unhappy, to see a foreigner walking pass. Although he was eighty eight years old, I could tell he was still really healthy. I asked him how he did it and he replied “I just don’t worry about anything.” Good advice. We talked about all the animals I had seen on the trail and told me if I saw a snake again to catch it and bring it to him because he loves the taste but had not eaten it for twenty years!

As far as I could tell, from around 11am my GPS map diverted me from the Tokai Shizen Hodo that was meant to run along the base of some mountains and instead took me on roads that ran through towns. I had planned to resupply at a supermarket that appeared on my map, but to my shock and horror this is what I found:


It was Sunday and everything was closed. I checked my map but the surrounding area seemed barren of shops or restaurants. All I could do was walk and hope I would find something, anything, that would provide me with some form of sustenance. The irony was not lost on me as I walked past field after field of wheat; there was literally food all around me and here I was, extremely hungry:

My saviour came around the time I was beginning to contemplate what exactly I would say if I started knocking on people's doors in search of food. I was walking along and had stopped at a vending machine for a sugary drink when these kids spotted me and wanted to know why I was out here: 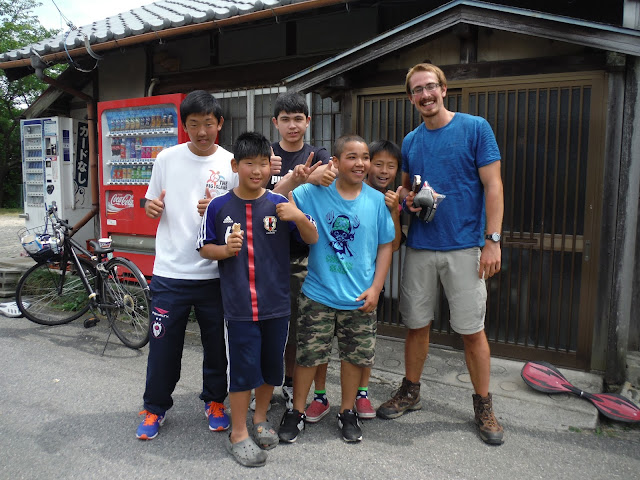 They couldn't believe I had walked from Tokyo and had a million questions for me, the most interesting being "where do I go to the toilet in the woods?" I showed them my trowel and explained to them I dig a hole, which they all found hilarious. They then wanted to see my hiking gear and try it out, to which I obliged: 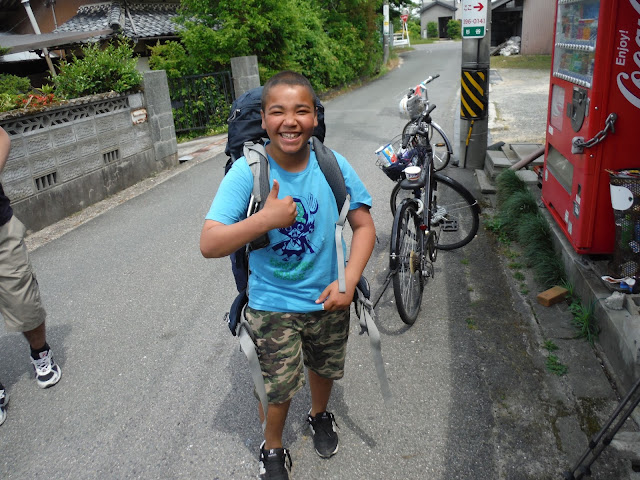 I then said I had a question for them, "where is the nearest store I can get some food?"

"It's just down this road" one of them piped up, "we'll show you where it is." So my entourage and I set off down the back streets of rural Japan, and no sooner than twenty minutes later, at a convenience store I never would have found on my own, I was pigging out on all the food they had to offer. 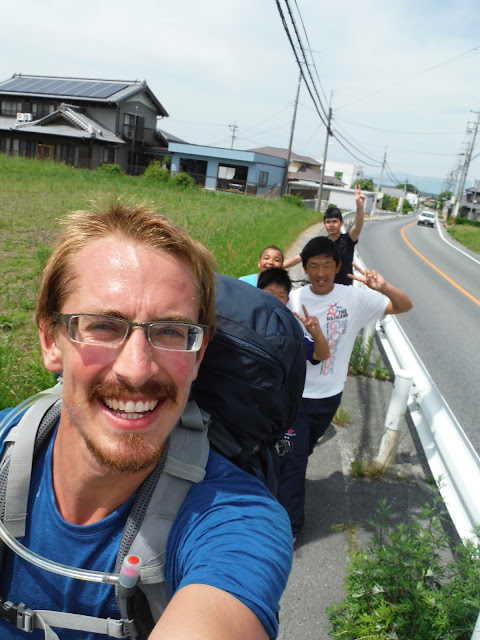 I offered to buy them all something to thank them for showing me the store but they refused saying that it was fine. Such polite and respectful kids.

By the time I had finished pigging out it was around 3pm, and I stepped out of the air conditioned comfort of the store into a wave of heat. There was not shade to walk in, and I must have gone through two litres of water in two hours. So when I arrived in this small rice growing valley with no one but me in it, I decided to make use of the shade and nice green grass to have a rest. Sounds simple right? What could possibly go wrong?

I inflated my pillow, laid down, and closed my eyes, just happy to be out of the sun. I could hear the birds singing and a cool breeze was blowing, everything seemed perfect. So naturally I began to doze after about five minutes, but snapped awake when I felt a stinging sensation on my right calf. I sat up and saw a little half ant half fly like insect biting into my leg with nasty looking pincers that had enough strength to draw forth a bead of blood. I quickly swatted it flat and was inspecting the bite when I felt a second sting on my left thigh. I rolled up the leg of my shorts and found another little bastard biting into me, blood forthcoming just like the first. I smushed the second into a splatter of bug and blood, and as I was inspecting the second bite I saw another one on my arm and went to squash it too. That's when I felt another sting on my lower back, and then another one on my ankle. It quickly dawned upon me that these bugs were probably all over me and if I didn't do something quick they would really start taking chunks out of me left right and centre. I pulled up my shirt and saw two milling around on my stomach alone, and as I was squashing them I felt another biting into the tender spot where my underwear met my thigh. This attack close to the family jewels sent me into a full blown panic and I started ripping off my clothes and swatting myself all over. Luckily no one was in the valley to see because it would have frightfully embarrassing if they had been, I must have looked crazy and possessed, one moment taking a nice relaxing rest, then the next I was naked, jumping up and down, hitting myself all over. I ripped open my pack and got my towel and dipped it in the small stream (too small to get in myself or I would have) that was running beside me and started washing myself all over trying to get them all off. The worst thing was the irritation the bites caused, they almost immediately went red and were (are) incredibly itchy: 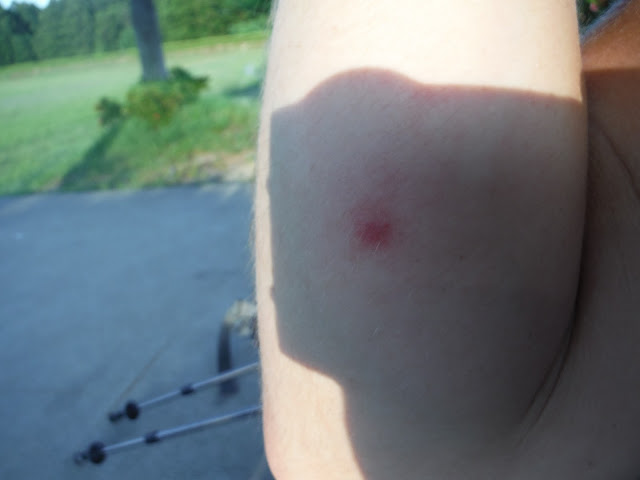 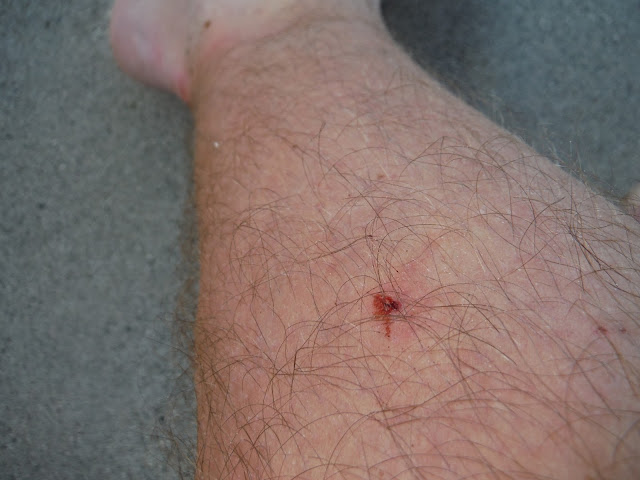 I'm not going to mention all the places I got bitten, but lets just say it wasn't pretty. I washed all the clothes I had been wearing in the stream before I dared put them back on, the whole ordeal taking over forty minutes, with me being extremely careful I did not get attacked again. As I walked out of that valley wearing damp clothes, exhausted, disheveled and extremely itchy, I remember asking myself if that could have gone any worse? Maybe a large mammal attack would have topped it, but that was about all I could think of.

For the rest of the day I have been trying not to scratch my bites, something that has been incredibly hard to resist as scratching them feels so good, one hundred percent instant relief, but then when I stop the itching comes back two fold for the next few minutes driving me nearly insane.

A bit worse for wear and not in the best of moods I continued on, going wherever the GPS told me to go, and around 6:30pm I found this sports field that was perfect for camping:


I'm now sitting in my tent now trying not to scratch the bites wondering if I will get any sleep tonight...